We did it! Our home in Colorado Springs sold. We are now homeless! Well, sort of… we are now officially living the nomadic life.

Ten years ago Jennifer and I stood before family, friends, & God and changed our lives and committed to traveling this path we call life together. Wherever it might lead us. We were young and full of hopes and dreams. The last 10 years of our lives have been good. I want to make it clear that we have nothing to complain about and feel very blessed. We both have seen moderate success in our jobs, moved to an amazing city, and bought an amazing home. The American Dream was seemingly ours and yet it wasn’t our dream. We are people cursed by Wanderlust and never stopped dreaming of a life of travel and adventure.

Through MomentsBeyond.me we have shared some of the short glimpses we have had with an adventurous life. We have been blessed to have those short-lived moments between living to work instead of working to live. One such adventure was two years ago when Jennifer and I spent 5 weeks living out of a van while traveling around New Zealand. We ran across amazing people traveling for 9 months or more and wondered how they did it.  How were they living a nomadic life? We had an amazing time in New Zealand. Even while we were still there we began to talk about what it might be like to live the nomadic life full time. We are middle class and feel extremely blessed having been born in the United States. We have worked hard to get where we are now. So how could we possible financially live a nomadic life of perpetual travel?

When we got back from New Zealand we began to read blogs written by people younger than us who had sold everything and hit the road. Their adventures varied from those who had set out with nothing more than a backpack of essentials to those driving massive 5th wheel RVs, to those who had set sail on boats. Jennifer and I are overly responsible people. We don’t want to be a drag on our loved ones should something go wrong. So we put a budget together of what it would take for both of us to be able to travel full time. We quickly realized that for almost half of what we live on per year in a stationary home, we could live out of a vehicle and see the Americas. Perhaps even transition to living out of backpacks after the Americas and see the world. The obvious question, of course, is how do we make half the money, if we have no home base?

The Internet has changed the world

As most of us realize the internet has changed everything about our world including what it looks like to work and make a living. Gone are the days where everyone has a 9-5 job that requires them to report to an office five days a week. Telecommuting is taking over the workforce. Jobs that allow workers to work from anywhere are growing at an astonishing rate and for good reason. Storefronts & office buildings are expensive to maintain. The flexibility of a “work from anywhere” job is appealing to a skilled and knowledgeable workforce.  Naturally, this segment of the business world is expanding rapidly.

With that Jennifer set out to find that “work from anywhere job.” It took her nearly six months of looking, but she found it and after nine more months with two promotions she alone hit the financial number we were looking for to make the leap to a location-independent, nomadic lifestyle.

During that same time, we had decided we wanted to attempt the “Van Life” instead of taking on a backpacking adventure. Sailing was never an option for Jennifer and it costs too much money to own a boat anyways.  For those who aren’t familiar with the term “Van Life,” it refers to people who retrofit Sprinter-type vans to be able to live out of them. Yes, our aspiration in life has become to “live in a van down by the river.” With the advancements in solar and energy-saving products that run off of batteries that charge through USB, this is becoming a way of life that can be “off the grid” and “green” or at least until you start the engine because these vehicles don’t get amazing gas mileage. Still, the carbon footprint of a van is probably a fraction of a traditional home.

The Search for the Perfect Van

After looking at new Sprinter Van prices (for like a second), we realized used was our only path forward. After nearly three months of searching and two near-miss scams (Craigslist is a blessing and a curse), we decided to broaden our horizons and see what other options were out there. I stumbled across TravelAmateurs.com, a couple who are traveling to South America in a 4wheel pop-up camper. This seemed like a great idea! Pop-up campers add very little headroom to a truck so they have low clearances and a 4×4 truck can go anywhere we would want to go.

The Search for a Pop-up Camper

I immediately changed my search criteria and started looking at pop-up truck campers. I’ve never been big on buying brand new things and a new pop-up camper isn’t cheap. So I did my research (or so I thought) and found one on Craigslist that I thought would be perfect. We bought a 2009 Palomino Bronco 1500. It has been well taken care of by an older couple in Black Forest, Colorado. Unfortunately, it turned out to be heavier than expected. The extra weight forced us into a larger truck. We knew this might happen and that is why we bought our Camper first. The seller was local and nice enough to drop the camper off in our yard where it sat without a truck for nearly two months.

The Search for a Truck

After an exhaustive search to find what started out as a 1/2 ton truck, but now needed to be a 3/4 ton truck and probably should have been a full ton (that is a story for another post), we found a 3/4 ton truck, 3 hours north of us. After having a local mechanic of my choosing check the truck out, we drove up to Fort Collins, Colorado and bought it on the spot. It is a 2008, 4×4 Ford F-250 extended cab with an 8′ bed. We had wanted a truck without an extended cab so that it would have a shorter wheelbase for off-road terrain, but we ended up with an extended cab. It was a blessing because I was able to repurpose the backseat area (a story/post for another time).

Making a Truck a Home

Now we had our truck and we had the camper. We knew we needed to change the electrical system in the camper over to solar if we were going to live the nomadic life in it. However, as time went on we discovered more and more and more… and more things we needed to change to make it livable full-time. Especially so that Jennifer could do what she needed to for her job. I will go into some of these upgrades in future posts, but for now, just know that it took nearly nine months and two test outings in the rig to get most of the upgrades & kinks worked out… I’m sure there will always be more. I initially thought the renovations could be done in 2-3 months. Ha!

Selling Our House and Our Stuff

So about 20 months after New Zealand, Jennifer and I finally really decided that this was something we could do. We set our sights on selling our home of only five years in one of the greatest cities on earth, Colorado Springs. Here again, we ran into needed upgrades. I spent 3 solid months fixing all of the little things that needed to be fixed to get top dollar for the house. We got everything fixed and then the real challenge came. We had to sell almost every possession we had ever acquired.

It was difficult to let go of the first few items on Craigslist, but before too long we were chucking things into the yard sale. We kept some family heirlooms and sent those to live with my amazing sister.

The two hardest days came in the same week. First, we sold our fish tank and had to say goodbye to our pets. It sounds ridiculous, but everything else was just stuff, things; these were living creatures whose personalities we had come to know. The second was our King Bed. I had designed and built it myself from RAW lumber… but, I can always build another if I ever buy tools again.

We did months of Craigslist sales, and 4 days of yard sales and still had stuff left. We off-loaded the rest at the local Goodwill store days before our home hit the market.

The house was on the market for 2.5 days and we had 5 offers. Our realtor did an amazing job!

We are Home Free and living the Nomadic Life! 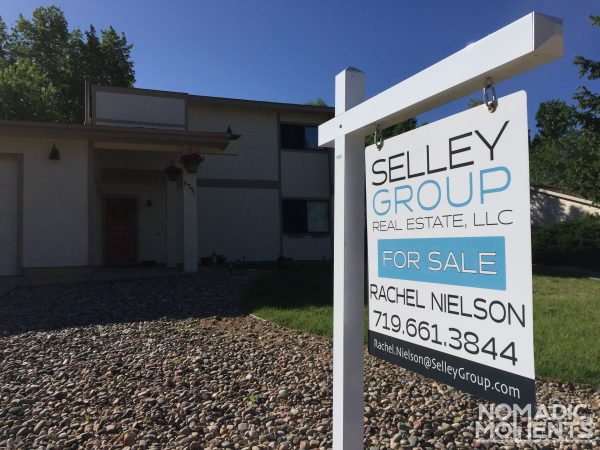 One month later and 25 months after returning from New Zealand here we are having just signed the sales papers for the house and set out on our nomadic life adventure. We are now full-time nomads! So where to first? We invite you to follow along on our adventure and share the adventure with your friends. Maybe we are crazy, but maybe we aren’t. After all, you only live once so you should probably live the way you are designed to live instead of following other people’s dreams, right?

Below is how you can follow our nomadic life adventures. We plan to travel all over North America and perhaps in a few years to Central and South America. If you have time, when we are near you we would love to see you all. Drop us a note and let us know where is the best place to get a taco… I love tacos.

If you find our Nomadic Life interesting please share it on your social networks. Thanks!